Due to the global COVID-19 Pandemic many health care professionals working in rehabilitation have begun providing services virtually. Please consult with the resources listed on the CorHealth website indicated in the link below as well as the Tele-Rehabilitation and Virtual Care Resources tab in the Clinical Resources section.

CONTACT THE WEST GTA STROKE NETWORK REHABILITATION COORDINATOR BY PHONE AT 905-848-7580 EXT. 5683 OR BY FILLING IN THE CONTACT SHEET BELOW

HYPERACUTE STROKE CARE
Hyperacute care involves all direct care, service delivery, and interactions from first contact with the healthcare system after the onset of an acute stroke to the movement of the patient to the acute inpatient care. Specifically, during transport to the hospital and in the emergency department.
NEED FOR HYPERACUTE STROKE CARE PRACTICES

Over 1/3 of stroke patients do not contact emergency medical services for transport to a hospital and only 30% of patients arriving at the hospital are getting there within the 3.5 hour time frame to be eligible for acute thrombolysis. As a result, the time to brain imaging was prolonged and the time between hospital arrival and tPA administration was over 1 hour – exceeding the target 60 minute time frame. Canadian Stroke Best Practices Recommendations added the hyperacute care guidelines with the aim to improve performance in these areas and reduce the time between stroke onset, arrival at a hospital, and treatment. The new hyperacute stroke best practices are in place to help achieve this goal and improve outcomes for all stroke patients.

Hyperacute stroke care is time sensitive and involves assessment, stabilization and treatment in the first hours after stroke or TIA onset. It represents all pre-hospital and initial emergency care for TIA and stroke. This includes thrombolysis or endovascular interventions for acute ischemic stroke, emergency neurosurgical procedures, and same-day TIA diagnostic and risk stratification evaluation.

The primary underpinnings of ‘hyperacute stroke care’ are to RECOGNIZE and MOBILIZE. This starts with recognition of stroke symptoms by patients, families, and bystanders. The Heart and Stroke Foundation has launched a new signs of stroke campaign in 2014 that uses the FAST mnemonic (FACE, ARM, SPEECH, TIME) aiming to increase recognition of the signs of stroke and take appropriate action immediately. Mobilization has to occur without delay, from emergency medical services response to a potential new stroke patient, transport to hospitals with specialized stroke services, rapid access to neuroimaging, stroke specialists and time-sensitive treatments, such as acute thrombolysis and endovascular therapy. (Canadian Best Practice Recommendations, June 2015)

A coordinated and integrated approach to hyperacute stroke care is emphasized within the West GTA Stroke Network, initiatives collaborating with Emergency Medical System, emergency departments, and other stakeholders involved in this phase of care.

What is Tissue Plasminogen Activator (tPA)?

“Time is brain,” a common mantra used to describe the urgent nature of stroke care, reflects the startling reality that 1.9 million brain cells die with each minute that treatment is delayed.1 Recognizing the urgent nature of stroke, it is critical that stroke patients are identified and triaged by Emergency Medical Services (EMS) and Emergency Department (ED) hospital personnel in a timely manner.

In 2015, new evidence emerged indicating the effectiveness of endovascular thrombectomy (EVT) for the treatment of acute ischemic stroke. There have been five major trials that demonstrated efficacy with major functional benefits for patients2. The ESCAPE trail3 revealed that a procedure called Endovascular Therapy (EVT) increased positive outcomes by 25% and reduced the death rate by 50% for large ischemic strokes. New evidence from the DAWN trial has shown that in some cases hyper acute stroke treatment can now be extended up to 24 hours if the stroke patient meets the criteria.

Endovascular Treatment involves mechanical clot retrieval (embolectomy) from a large cerebral vessel performed by specialists with neuro-interventionalist expertise. It is a highly specialized procedure and performed at a limited number of sites in Ontario. Trillium Health Partners is one of the centres in Ontario that performs EVT. 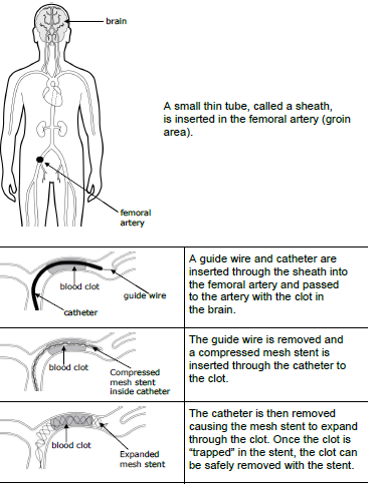 (The above image was created by the Central South Stroke Network: permission was obtained to use image Obtained from LHSC: Clot Retrieval for Stroke, Patient and Family Education pamphlet, 2017.)

2 The Mr Clean Trial was completed and demonstrated positive outcomes for patients. Subsequent to Mr Clean, the ESCAPE trial was stopped early due to overwhelming positive results and concurrent positive results of the EXTEND-IA1 trial. Two further trials SWIFT PRIME1, and REVASCAT

In order to efficiently triage the acute “walk-in stroke” patients presenting to our community hospitals within 12 hours, the West GTA Stroke Network (WGTASN) is introducing two LVO screening tools (FAST-ED and ACT-FAST) that will be utilized within the region. See below for more details on each LVO screening tool.

*Please be sure to refer to your specific organizations acute stroke protocols for more detail.

The Canadian Best Practice Recommendations (CSBPR) is intended to provide up-to-date evidence based guidelines for the prevention and management of stroke, and to promote optimal recovery and reintegration for people who have experienced stroke (patients, families and informal caregivers).

They are updated and released every 2 to 3 years with interim updates of specific  topics when critical new evidence emerges.

They address the continuum of stroke care from stroke symptom onset through the hyperacute period to rehabilitation and longer-term recovery.

The target audience for the CSBPRs includes all healthcare professionals involved in the care of patients with stroke or TIA across the continuum.

Hyper-Acute Best Practice Update: 2018 update to guidelines for healthcare providers caring for people with current or recent symptoms of acute stroke or TIA

Hyperacute stroke is a medical emergency and optimizing out-of-hospital care improves patient outcomes. Emergency medical services play a critical role in out-of-hospital (prehospital) assessment and management of suspected stroke patients. Acute interventions such as thrombolytic therapy are time-sensitive and therefore strategies such as re-directing ambulances to stroke centres to facilitate earlier assessment, diagnosis, and treatment may result in better outcomes.

Patients who show signs and symptoms of hyperacute stroke in the community must be treated as time-sensitive emergency cases and should be transported without delay to the closest institution that
provides emergency stroke care. Immediate contact with emergency medical services is strongly recommended because it improves the time to treatment for acute stroke.

Emergency Medical Service (EMS) dispatchers must triage patients showing signs of hyperacute stroke as a priority dispatch. EMS providers should use a standardized diagnostic screening tool. In Ontario, a Paramedic Prompt Card has been implemented for this purpose. The prompt card assists EMS providers in initially recognizing the signs and symptoms of stroke and subsequently in determining the most appropriate hospital to transport the patient.

The Canadian Stroke Best Practice Recommendations have excellent resources. Some of the PDF resources are attached below. Please refer to the section for more detailed information outlined Emergency Medical Services Management of Acute Stroke Patients.

The establishment of a local stroke protocol at your organization is essential.

Refer to your organizations pre-printed stroke orders for specific details regarding investigations.

Telestroke is an emergency telemedicine application using videoconferencing technology. Telestroke sites can provide assessment and treatment of patients experiencing acute stroke via consultation with a provincial Telestroke neurologist. The neurologist can view the patient’s CT scan electronically, “see” the patient using live video and discuss results with the patient’s physician.

The use of a stroke scale in the assessment of the acute stroke patient has been established as best practice stroke care. The Canadian Stroke Best Practice Recommendations (CSBPR, update 2015) state: “A neurological examination should be conducted to determine focal neurological deficits and assess stroke severity [Evidence Level B]. A standardized stroke scale should be used, such as the National Institutes of Health Stroke Scale (NIHSS) or the Canadian Neurological Scale (CNS) (page 2)”

The NIHSS is a proven, reliable and valid tool in the assessment of the acute stroke patient and has become more common in influencing decisions for treatment options for stroke patients in the acute setting (i.e. thrombolysis therapy).

Within the West GTA Stroke Network region, hospital sites are either currently utilizing the NIH Stroke Scale or they are in the process of implementing the scale. As an aside, some Emergency departments within the region utilize a modified version and the in-patient units utilize the full version.

The NIHSS does not require certification to be used in practice, but education and training is required to attain and maintain competence in using the scale and interpreting the score. (CSBPR, Table 3.1)
“Healthcare professionals using the NIH Stroke Scale as a diagnostic tool on patients must show and document proper competency on the use of the tool. Before using the NIHSS it is important to ensure that all health care professionals are following the standards for training and certification program”. This can be found at www.NIHStrokeScale.org (pocket guide)

Please note this section refers to other clinical resources that are not already embedded in specific other sections located in the hyper-acute stroke section of this website that may be useful to you. Should you be looking for something specific please ensure you go to the outlined section if not there please send an e-mail to the key contact person outlined below.

Time to Treatment With Endovascular Thrombectomy and Outcomes From Ischemic Stroke: A Meta-analysis (2016)